Skip to content
A Play for Two People…and a Podcast for Many, Many More

A Play for Two People…and a Podcast for Many, Many More

You can hear it here.

We often call our audio experiences ‘theatre for the ear.’ But Acoustiguide’s recent partnership with Playwrights Horizons took that idea to the next level. Over the last year, Acoustiguide has been the creative production consultant to this esteemed off-Broadway company as they’ve embarked on the first season of their podcast, Soundstage.

Initially scheduled for release in summer 2020, Playwrights Horizons decided to step into the shelter-at-home space now, with a schedule of radio plays to be released every Thursday or every other Thursday over the next few weeks. Working with Alison Koch, the Theatre’s Digital Content Producer and Associate Artistic Director Adam Greenfield, Acoustiguide got to go—literally—behind the curtains to see how theatre gets made and contribute our own expertise in creating audio-based experiences.

On April 30th, Jordan Harrison’s Play for Any Two People will drop. Harrison experimented with a play that involved having two people listen to the same thing at the same time and interact with each other. As Tony Cirne, Acoustiguide’s Manager of Multimedia Production/Composer, put it: “What it’s meant to do is to have two people acting in front of each other – it’s an ambitious concept to try to pull off. Especially because it requires participation of the listeners.” In this concept we saw overlap with what we create for our in-gallery experiences, where museum visitors can look, listen to commentaries and talk to each other at the same time.

The Playwrights team suggested a binaural recording to enhance Harrison’s concept, and Cirne transformed the idea into reality. If you’re not familiar with binaural, the highly simplified explanation is that it’s a three-dimensional audio experience in which you hear sound as if you’re moving in space. And the only way it works is if the listener wears headphones. 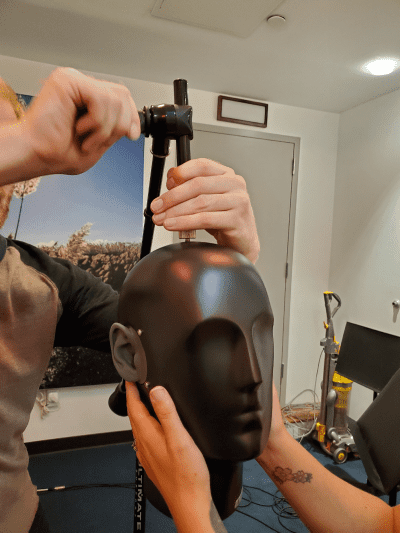 We started with “Steve,” the wonder binaural head. He has a mic in each ‘ear.’

Next, we needed the right space. Binaural recording requires the kind of audio ‘reflections’ any normal room has, so this session couldn’t be recorded in our typical soundproof studio.

We settled on the Green Room (aka the staging room where talent hangs out before they start to record) at CDM, who kindly set things up for us. Someone (well, Alison) had to walk up and down the hallway to act as noise enforcement and shush people going to and coming from the elevators. The ambient sound that inevitably crept in was a substantial challenge for Cirne’s post-production work.

On any given day, Acoustiguide’s creative team works closely with voiceover actors, but recording Playwrights’ actors was quite different. Some sessions lasted five to eight hours! Playwrights experimented endlessly—testing, pushing and prodding their actors—to get the right performance. And because each podcast runs as long as 30 minutes, final storytelling arcs can accomplish #storytellinggoals in profound ways: They can build on emotion, create drama, reward listeners with a sense of release, go for laughs…and sometimes even toss in some salty language. Acoustiguide has brought back these lessons to our own work, and it has given us plenty of ideas for future work (omitting the salty language of course!)—particularly about interactive audio experiences.

The result of all of this heightened creativity, inventive production and hard work is a series of undeniably original, dramatic experiments in audio storytelling. You can hear the audio plays on your regular podcasting channels. Check out @phnyc or @SoundstagePH to find out when the next one drops.